In steelcurse an unnamed protagonist sets out to find the source of coruption of the lands.

Warning! This page contains a lot of spoilers.

Steelcurse is a story about a young hero who has been orded by the council of storms to stop an evil wizard. This wizard uses very black magic to succeed in his wicked plans.

Being sent for by the Council of storms, our protagonist arrives in the little town called Yarmouth. After wondering through the streets of Yarmouth the hero meets a fierce female warrior called Ursula at the council barracks. Where she tells him to find a dwarf called Bruni and sends him into the Black Oak Forrest, north of Yarmouth. Without hesitation he enters the woods to find Bruni. The Black Oack forest is a dangerous place where many lesser predators prey upon the weak and ill prepared. After killing the occasional Wind Skeever and Tarab our hero reaches the Black Oak Glades at the end of the Black Oak Forrest. Here he encounters Bruni. Bruni is a well respected veteran who has served the The Council of Storms for many years.

He instructed his subordinate "Sirrus to trace a group of Hoglins who're opperating at the other side of the Glades and to find out what they're up to. The hero decides to travel towards the Hoglins and have a chat with them. One of the Hoglins accidently tells him they're on a mission to find magically enchanted items. With this in mind the hero quickly scouts the glades and finds a magically enchanted Dirk. He shows the Dirk to Bruni who tells him that the short blade is the same kind of sword the original Concil of Storms Legion used to carry. Magically enchanted weapons are forbidden nowadays but they used to legal back in the days.

While Bruni and the Hero were discussing the enchanted blade, Tarris and Sirrus were ambushed by the evil spider Shika. Luckily they bove survived but Tarris was gravely wounded. Ursula and Sirrus ask the hero to slay Shika before she makes more victims. After the hero finished his buisnes with Shika. Ursula askes him to go to the Sevrock Ruins east of Yarmouth to look for two lumberjacks who went missing. On is way to the Sevrock ruins he encounters lots of twisted beings called Pooka. Pooka are beings that used to belong to a proud civilization that experimented a lot with magic. Their thirst for magic became their downfall as nowadys their civilization is no more. What's left of their civilization are this nasty twisted creatures who will do anything to have a taste of magic again. After the hero fights himself a way through this Pooka he encounters the lost lumberjacks Sean and Chard. They've gone into hidding because there is a huge and terryfing monster on a rampage nearby. This monster goes by the name of horror. Also this creature is no match for our hero.

After he slays the Horror and returns the two lumberjacks. Ursula tells him an elf is looking for him near Sevrock road. The elf turns out to be a female with the name Syl. The elders of the Wood Elf Camp have sent her to bring the hero toward their village. The hero agrees to tag along and is welcomed by another when he reaches the village. This Elf "Fae" tells him

she is chosen by the elders of her village to instruct him, as they do not posses the human tongue. (for conversation press expand). 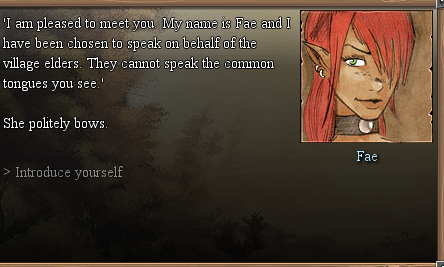 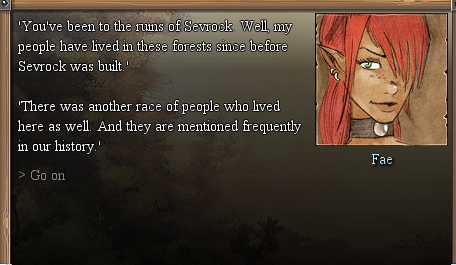 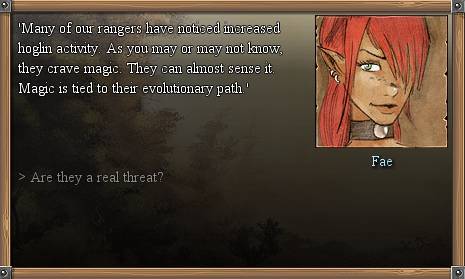 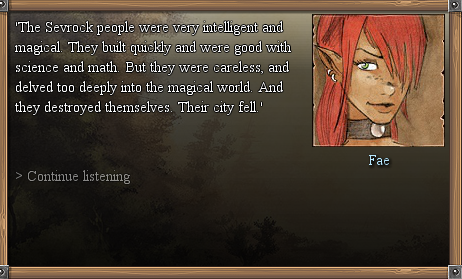 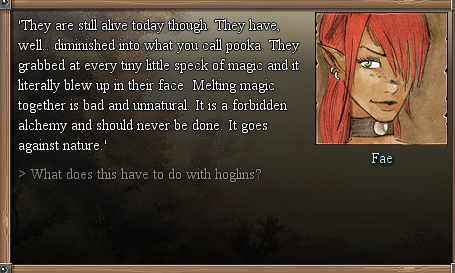 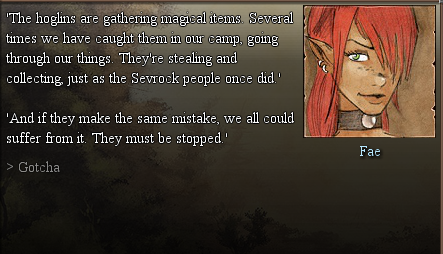 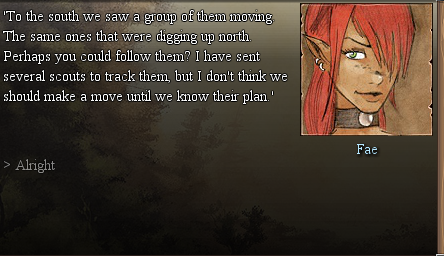 After Fae instructed the hero , he heads towards the cliff to confront the leader of the Hoglins. When he reaches the cliff he finds a small hoglin village. In this village all Hoglins are very busy gathering all sorts of magical artefacts. All artefacts are put in a huge cauldron where they extract the magical essence out of the items. After the hero kills their leader "Boss man" ,one of the hoglin tells him they've been hired by a wizard to collect all these items. After finding out who hired the Hoglins the hero continues his quest in search for the evil wizard.

The hero folow the trail down east, which leads him to an abondend tower. This is the place the Evil Wizard used to live. He hears from some elves that have been sent to scout ahead of him, that the wizard traveld north. The hero takes a boat north where he meets Harker. Harker tells him the wizard is responsible for a lot of tragedies in the lands where he lives nowadys. He killed lots of Owlbears and turned them in to zombies to do his bidding. The wizard also destroys the land where he lives. The land where he has build his new tower is completely wrecked. Nothing lives there anymore, the only thing that is left over there is an huge amount of black rock. Those plains are called The Sea Of Black.

After hearing this the hero decides he has no time to lose. He heads straight towards the Sea Of Black, killing all the creatures and accomplices the wizard sends to stop him. When the hero finally reaches the wizard he finds out that the wizard has a major god complex and decides it's no use arguing with him. A final battle occures and the wizard falls, which brings the world back into equilibrium.

This page contains the characters found in Steelcurse.

Community content is available under CC-BY-SA unless otherwise noted.
Advertisement