The Council of Storms

Edit
watch 01:36
We're Getting Mutants in the MCU - The Loop
Do you like this video?
Play Sound 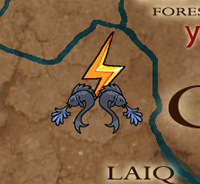 The Council of Storms is a racially mixed government ruling over Flaner and parts of Gord Hel Hetier. They primarily consist of men and dwarves, although there are a few other races represented on the council. They are a smaller government with an army that is spread a bit too thin. They are sometimes bullied by larger kingdoms or forces.

Their emblem is a lightning bolt, with one or two fish spitting water.

Their seat of power is located in the forest city of Yarmouth, deep in the Black Oak woods.

In all cities and towns within control territory by the council, magic is deemed dangerous and illegal, however this law is frequently not enforced. The lands themselves are very magical in this part of the world.

Community content is available under CC-BY-SA unless otherwise noted.
Advertisement